Team Spence got a whole lot bigger the past month...
...And no I'm not pregnant.
When I was a wee little baby I was adopted to the Belnap family. I am the LUCKIEST girl in the whole world to have my parents as my parents. Plus my sissies rock quite a bit, I'll keep them. Well, my adoption was closed, and when I turned 21 I was supposed to be able to open up my files and learn about my biological parents. I never really thought it would go anywhere, and had already come to terms that I might never know the people who, uh, birthed (?) me, but last November I got a peculiar phone call from Children's Aid Society (my adoption agency) telling me my birthmom had contacted them and was starting her side of the paperwork to be able to open the files and if I wanted to meet her I could start on my paperwork, and also that my birthdad had filed his name with the state with this registry to find me when I turned 21. It was more than a dream come true! I love my family, but it was so amazing that I was going to be able to meet my birthparents and see them face to face and ask them questions and stuff!
We had lots and lots of paperwork and complications happen, but the day before new years eve, I FINALLY got a letter from Carrin, my birthmom. A LOT had happened since I had heard from her last in 1997...she got married and was raising two kids, Geena is 16 and basically my twin, we look a lot a like and act alike and both dance and...yeah, if you knew me when I was 16, then you know how Geena is, and Carrin's other kiddo is Andrew, he's 12 and SUCH A BOY. Skateboarding, biking, crashing, getting dirty, crushing on girls...yeah. He's quieter so it's harder to get to know him, but when he does talk he totally cracks me up. Also, his ears turn red when he's tired. Cute. Hahaha. And then Carrin's hubby is Ray. I call him Pirate Ray, or just Pirate. You see, Carrin and Ray met on a blind date and got married 2 1/2 weeks later. Yes folks, WEEKS. And then I found them on facebook, and Ray has a huge scruffy beard and long, long hair. So, not really knowing Carrin, I dubbed her psychotic, but luckily I kept talking to her...haha, because she's so not psychotic, I promise!! Ray grows his hair out for Locks of Love and right now he's on the grow out phase...so he looks like a pirate...hence the name. And Carrin and Ray are going on 13 happy, happy years and they're basically perfect for each other.
Carrin and I e-mailed like crazy for two weeks and met on January 15, 2010. It went so well!! She brought Geena and Andrew, and later we all went to Sizzler for dinner with Pirate (Logan was there too kids). It went better than I could have ever hoped!! 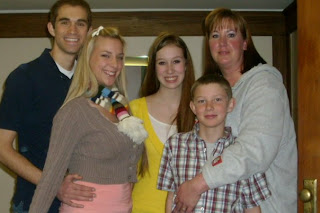 This is the whole group (minus the Pirate..I have yet to get a picture with him...I'll work on it)...Logan, Me, Geena, Andrew, and Carrin. See a family resemblance? I think so. Especially with Geena and I...see.... 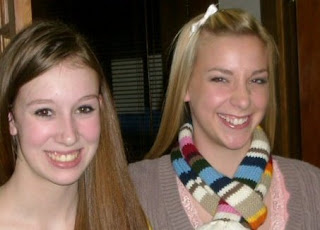 Next big reunion...Not as many pictures this time...but through Carrin I got my birthdad's e-mail address and I got to meet him February 1....His name is Mark, he's married to Angie, she has a daughter named Tatum who is 12 I believe, and an amazing soccer player...and super dooper cute. Angie and Mark are expecting a little girl this summer...which is good because I only have sisters, Logan only has sisters, and with Geena and Tatum thrown in the mix, we might as well just keep the ladies in the family...uh...sorry Andrew, you're severly left out. But I still love ya. Here's a picture of the Mark Meeting....we went to my fave restaurant...Los Hermanos...so yummy!!! And yes, I'm wearing a Los Hermanos shirt. Don't judge.
This is Angie (baby in the oven...not that you can tell...I was scared to ask about her pregnancy because I thought maybe I had made it up in my head because she so doesn't look pregnant at ALLLLL, but yes, I do get another little sister, so hooray), Tatum, Mark, Me, and Logan. 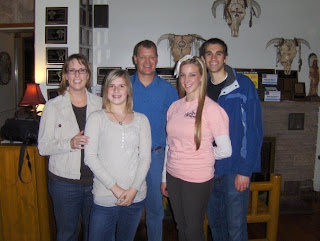 I've decided I have Carrin's eyes and nose, and a femine version of Mark's jaw and smile. It's been a WHOLE STINKING LOT OF FUN getting to know both of them! I'm seeing more of where I come from, my heritage, why I act the way I do, and so on. I've loved it! I can't wait to get to know them better!
Posted by Camille Spence at 4:22 PM