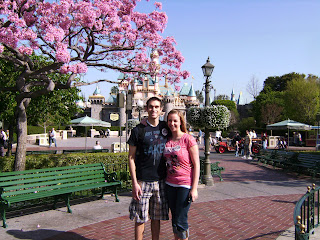 Logan and I went to Disneyland again this month. And it was fabulous. Beautiful Sunshine, not too hot, not cold at all, and just amazing. We wore our Just Married pins again too, and got congratulated everywhere we went, and had someone offer us our own private boat for It's a Small World. We didn't take it, because the line was full of little kids and we thought it would be totally unfair to them, but it was a cool thought. And, for those of you who watch Bones aka best show ever, we saw Eric Millegan, the guy who plays Zack Addy while in line for Toy Story Mania. My fave character on my fave show in line for my fave ride. How could that have gotten better? Well, other than being able to have gotten his attention and gotten an autograph followed by the Disney worker peeps letting us go on the ride five times in a row without getting off. The weekend was perfect. I so wish we were back there again instead of beating our brains out with school and work. However, countdown to freedom from school is 29 days. Less than a month. Hoorah!

Another big event in March was Autumn had her baby, Bailey Jo. She's the most precious thing ever ever ever. I love having another baby in the family to cuddle and play with. I just love having nieces and nephews. It's so much fun! I'm glad that I will get to be a part of their lives growing up. Gah, I love being an aunt.

Concert week for the UVU Ballroom Teams went great last week. Logan was roped into helping stage manage, film, and usher on different nights. I am so grateful to have such a willing to help husband. It was so sweet having him there and having him take part in pulling together a show we had all been working so hard on. I have the best husband ever.
Posted by Camille Spence at 8:19 PM