I totally suck at blogging. Update of Team Spence

My sister in laws are all so fantastic at this blogging thing and okay...clearly, with my last post in May, I'm not as fantastic. Ha. Well, so much has happened. Five months ago TODAY Logan and I tied the knot. It was the most amazing day and I could not have asked for more. The morning started off a little hectic with me waking up about two hours late, and my eyes were swollen shut from crying the night before with my daddy (I'm a total daddy's girl and I was sad to be leaving him). I made it to Cailie's house by SOME miracle since I couldn't see, which was followed by a few more miracles...my hair went up awesome, and two ice packs solved the eye issue (okay, remember on Hitch when he eats the fish and his face gets swollen? That's kinda what I looked like). After that, everything went off without a hitch. I was so happy sitting in the temple with Logan knowing that I get to keep him forever, and that FINALLY after a forever long engagement, we had made it to the biggest and best goal of our lives. The month of June was a rainy, rainy month, but June 12 was so sunny and nice and perfectly warm. Our pictures were gorgeous, and I just love looking at them, ahem, all the time. We had a beautiful luncheon in my mother in law's garden, and a super fun Mickey and Minnie mouse themed reception that night.

Logan took me up to Wolf Creek for a weekend away, which was so beautiful and relaxing. My roomie from Burklyn Ballet Theatre flew in all the way from New York to spend the weekend with us, so we also went to the Clark Planetarium and California Pizza Kitchen on Saturday, and then we spent Sunday Morning with them at MoTab's Music and The Spoken Word (where President Monson was also which was totally awesome. I wanted to jump off the balcony and announce to him that I had just been married in the temple 48 hours before), followed by a tour of Temple Square, the Joseph Smith movie, a tour of the Conference Center, and a yummy picnic. Monday we woke up and checked out of our amazing condo (it was at least twice as big as our shoebox apartment), and went to IHOP for a newlywed breakfast. It was a long going joke everytime we had passed it all weekend that it was all Logan wanted foodwise, so he was a happy camper to get his Colorado Omlette. We stopped by and visited my Grandma Belnap, and then returned back to Deana and Bill's home to open all our awesome wedding presents. All in all, it was such a fun weekend.

We moved into the tiniest apartment I think I will ever see in my entire life. The people in our ward call it "The Love Shack" which makes us laugh. It really is so small, that we have to keep living off of love or else we'll go crazy. Haha, just yesterday I went to walk down the hall, only to have Logan accidentally open the bathroom door and nail me in the face, followed by tripping on the bed, and then getting squished between the bedroom and closet doors. I'm telling you, it's a shoebox. But it's creating quite some interesting newlywed memories for us.

The rest of the summer was a whirlwind of work, school, and lots of fun with family. I miss that summer, it was definitely the best I've ever had.

This fall our little family has been all wrapped up in school, work, and dance. Yes, dance. Even Logan. I made the UVU Ballroom Tour Team, and get this, Logan tried out and made the Silver Team! Our concert actually is coming up December 3, 4, 5, and 7. Tickets are 10, with a matainee on the 5th and tickets are 8 for that show. So if anyone wants tickets, let us know. It'll probably be your last chance to see Logan dance, because I think I'm not letting him do team ever again. Haha, well, really only because it's a bigger time commitment than he has, especially with his grueling academic schedule and trying to get ready for applying for dental school. However, even though it's been a bit more stressful than either of us had anticipated, it has been really fun supporting each other through our teams and the performances. Come to think of it, if anyone sees this, next Tuesday November 17, Logan will be performing with his team, as well as competing against other students. It's around 7 at UVU, and it's gonna be fun! Oh, and did I mention it's completely free? Because it is.

Logan's favorite thing to do is to play with his niece and nephews, and on September 29, we got another bundle of joy, Will. He's the cutest, chubbiest, cuddliest baby ever and I love holding him. Logan can't wait until he gets bigger so he can play with him more, and no doubt, chuck him around and make him all hyper. I swear they all have the same age mentally...but it's so cute watching Logan get on their level and play with all the kiddos. He's going to be the best dad. We're not trying or in no way ready to be parents just yet, but we talk about it every once in a while, and Logan gets so excited thinking about having his own kids to play with. Gah, I'm married to the best guy ever.

Every day I'm reminded at how blessed I am to have Logan in my life. He is the best husband I could ever ask for, and I often don't feel like I can come close to deserving him. He is so kind, funny, considerate, loving, and he takes such great care of me. There is never a day that goes by with out him telling me that he loves me as well as showing me in some way. He is such an amazing guy. My family loves him too. Every time I talk to my mom, she always comments on how amazing he is and how lucky I am to have him, which I already know, but it's comforting to know that my family can all see it too.

I can't remember how to get pictures off my camera onto here...this is me calling to Brynn for help. Kaythanks. Super long, but there ya go...update of the lives of Team Spence.
Posted by Camille Spence at 8:10 PM 1 comment:

Okay...I totally want to make this all cute and fancy-schmancy and stuff...but I need my sister's help...so Brynn...when you see this and laugh at how boring this is, remember how you need to help me in my time of blogging retardedness.
But basically...I want to get this going so I can document the fun-ness of mine and Logan's life. We're getting married in 22 DAYS!!! That's 3 weeks from tomorrow and seriously, I'm so stoked! I just wish it were here already!
Logan and I met at the Orem Institute of Religion on August 28, 2008 and I had the BIGGEST crush on Logan from day one. He had just gotten off his mission, and was a little bit oblivious to girls and still really shy around me. After WEEKS of flirtation, finally Logan caught on and asked me out. Our first official date was September 27, and I've seen him every day since then except two. Haha, as lame as it is, we're pretty proud about it. We got engaged December 11...it was so cute, Logan proposed to me on our last day of institute class in front of everyone. I knew he was proposing soon, but that totally caught me off guard and I bawled like a little baby. I love Logan with all my heart, he's the sweetest thing that's ever happened to me, and I'm the most blessed lady to have won his heart.
Sooo...enough with the sap...Let's see if I can figure this out a little bit...and BRYNN, seriously I need help. Okay thanks.
So we're kind of weird, okay? We like to chill at either of our parents house to spend time with them, eat their food, steal their TV, ya know, the norm, but one day Logan and I got on this Chocolate kick at his parents house, and dipped darn near everything they had in their pantry in melted chocolate chips. Then we got in a chocolate fight. Pretty silly... 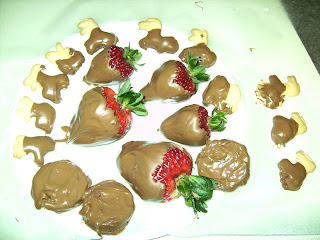 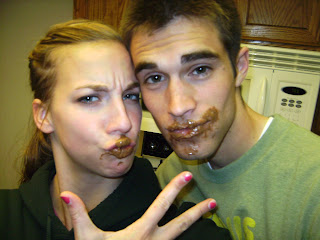 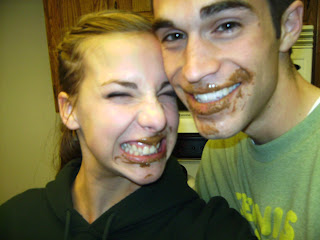 Okay. That didn't go so bad...I'll post this now...but really hopefully I won't be so dumb at this later and I'll figure it out and I'll be so happy and blah blah blah.
I've got loads of cute pictures of Logan and I with our niece and nephews...so I'll try to get those on here ASAP!
Posted by Camille Spence at 3:39 PM No comments: