We came across a new apartment suddenly, and very quickly decided it was time to take advantage of the opportunity and upgrade to a bigger place. We found out about the apartment on October 20, took a look at the apartment on October 22, and decided we wanted it the next day. We told them we wanted to be in by November 1st, and then realized that we had a week to frantically move everything over. Our old land lords were extremely understanding in our rushed move, and it worked out great because their son just got engaged and will be moving in soon with his new wife (but we didn't know that at the time)! Logan had about a gagillion tests and projects due the week of our move, and helped when he could, but I, Camille Marie Spence, basically moved us by myself (other than my blessed in laws that came and moved our furniture and the last boxes...Thank you again Doug!). It was quite the accomplishment. A crazy, stressful one. The Love Shack was so tiny to begin with, having all of our stuff in boxes in the middle of the kitchen was comedic...here is the chaos we lived in for the longest week of my life... 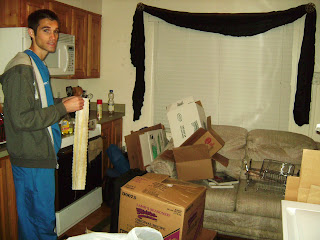 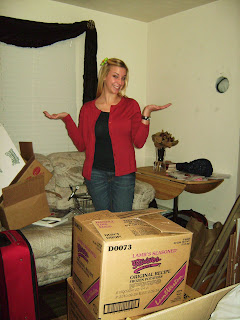 Me just trying to stay positive among the absolute chaos. 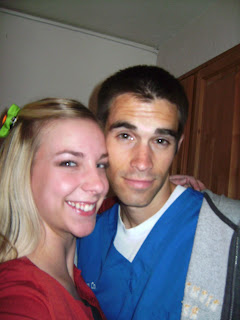 Our last night in our first home. 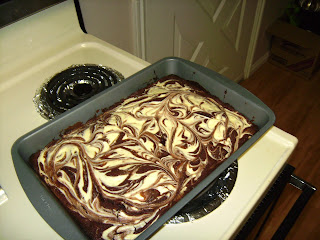 I was craving something creative, chocolate, and pretty. So, I started brewing some ideas and came up with this, which turned out great!
Lime Cheesecake Brownies
1 box brownie mix for a 9x13 pan (or just make your own from scratch like I did because I was out of mix, but I am TOTALLY for using brownie/cake mixes!)
Prepare mix like it says on the box and put in buttered 9x13 pan.
Then mix this up:
8 oz pkg. cream cheese, softened
1/3 c. sugar
1 egg
zest from 1 lime
juice from 1/2 lime (or the whole lime because I'm crazy about citrus like that)
Okay, really, cream the sugar and cream cheese together, and then add the rest of it and mix it up real good.
Plop spoonfuls of this on top of the brownie batter, and then take a knife and drag it all over the pan, mixing the cream cheese mixture and brownie batter together so it makes a marble-y effect, but don't mix it so much it gets to be a poopy effect. You want it marbled people!
Then, bake like it says on the box. Approximately 350 for 18 ish minutes I believe.
They are so yummy and so pretty, and a great way to dazzle up some box mix. And did I mention that they're impressive? Totally easy, totally impressive. Go ahead and take all the credit! Enjoy!
Posted by Camille Spence at 4:37 PM 2 comments:

If you've ever met my mother, you'd know she's a genius at basically anything she does. Cooking, crafting, mothering in general; she's amazing. This is a recipe she made for us growing up and we all LOVED it. I always thought it would be a super complicated thing to make, but after getting hitched I decided to just give it a try and make it for my husband, who was super impressed and thought I had slaved all day. But in reality, this recipe takes about fifteen minutes to throw together, and it really does taste like some fancy schmacy restaurant dish. I made it again yesterday, and marveled at how simple and tasty it really is. Give it a try! For reals!
Frenchie Dips
Brown well in a large pot 1 3-4 lb. chuck roast and place in slow cooker.
Add:
4 c. water
1 1/2 t. garlic pouder
1 t. basil
1 t. oregano
1 bay leaf
1/2 c. soy sauce
ground pepper to taste
Cover and cook on high for 1 hour. Decrease to low and cook for 4-6 hours more until meat is tender. Strain the broth and shred the meat. Serve meat on crispy rolls and use broth for dipping.
The best part about this recipe--you may freeze the meat in sandwich amount packages and the broth in small containers for a quick meal anytime.
Posted by Camille Spence at 3:08 PM No comments:

My birthmom, Carrin, has this older brother named Jerry. He passed away before we met each other, so I don't really know much about him, except that he's wonderfully kind, spiritual, and just sounds really awesome. And he has this really awesome recipe he made up called "Limeade Chicken." I'm always up for a new recipe, so I nabbed this recipe from Carrin, and ended up LOVING it.
Limeade Chicken
1/3 c. frozen limeade or lemonade concentrate (thawed)
1/3 c. honey
1/3 c. vegetable oil
1 t. celery or poppy seed
1/4 t. garlic powder
1/4 t. marjoram
1/4 t. salt
And I had a fresh lime on hand, so I zested that up and juiced it right in too.
Mix up in a large ziplock baggie, add chicken, and marinade for several hours, or overnight. Grill, bake, whatever ya gotta do to get the chicken cooked. I used my George Foreman Grill, and it turned out splendidly.
I made a bit more marinade and took some out before I added the chicken to use as a glaze later, which I later patted myself on the back for the genius-ness of this. I served the chicken over rice and with steamed carrots, which I covered with the glaze, and a green salad on the side. It was super moist, full of flavor, and just yummy and fresh! And the Hubby loved it!
Hope you enjoy it as much as we do!
And pictures of the new place are forthcoming. We need a new name for it, but how can you top the Love Shack?
Posted by Camille Spence at 10:11 PM No comments: