In case you needed a REALLY good laugh today...

I don't usually read this blog, but I found it on my friend's blog and just the title intrigued me...especially since becoming a new parent is definitely on my mind.
Logan and I were laughing so hard we were crying and could barely breath. Hop on over to THIS GUY'S BLOG to read his article "You said WHAT to your kid?"
It's awesome. Laugh away.
Posted by Camille Spence at 11:50 PM No comments:

We're 23 weeks now. The little countdown on my e-mail that tells me I have only 17 weeks to get ready for this baby freaks me out a little. So much to do, in what seems like such a short amount of time. My sister in law was saying this summer would probably go by really slowly for me, but it's completely flown by...maybe once Logan goes back for summer semester time will all of the sudden go at a snails pace.
Last night I was having some overwhelming feelings of fear of change. I know we will love her and once she is here, we will not want to trade her for anything, but still, I know it's change, BIG change, and I'm scared. This would be a great time for comforting and reassuring me. Thank you, amen. 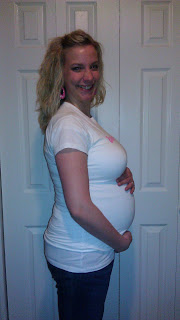 I have my next doctors appointment next week. So far everything has been perfect, we're hoping to hear the same old same old everything is right on track from Dr. Liddle. We've definitely been blessed to have such a smooth pregnancy thus far. I hope it just keeps on going like this until the very end. 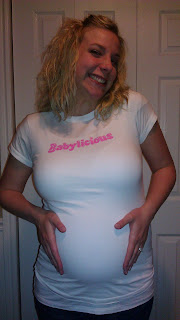 My cute mother in law found this funny shirt for me. Never mind my goofy face. The shirt says "Babylicious" on it, and that's how I'm starting to feel...most definitely, undeniably babylicious, and no going back now, even though I feel like I'm already stretched to my max, I know I'm going to keep getting bigger and bigger. In fact, I'll probably look back on this in 3 or 4 months and just laugh at myself. But for now, It's really hard to comprehend myself getting even bigger than I am now.
Also, things I will kill myself if I forget--
Baby Spence loves music. She kicks around anytime it's on in the car, or especially during my dance classes I teach. Her most favorite songs to dance around to are:
Walk This Way by Aerosmith (she's my daddy's granddaughter, what can I say?)
Price Tag by Jessi J
and Look at Me Now by Chris Brown
Why she likes these specific songs beats me, but anytime they're on she just kick-kick-kicks away.
Yesterday I saw Pirates of the Carribean 4 and it must have been loud in there to her too because she was squirming around the whole 2 hours.
She loves it when we're in Primary and singing songs. This little girl likes music!
Logan is (finally) starting to feel her kick on a regular basis.
Logan and I went to the temple to do some sealings and while we were in there she was just rolling around the whole time and would start kicking during the end of every sealing. It was pretty funny to me, like she was telling us she loved being in the temple.
I love being able to feel her move around (ha, can you tell?), it makes me feel like I'm getting to know her personality a little bit before she comes out. I bet she's gonna be the cutest thing I've ever laid eyes on :).
Posted by Camille Spence at 10:38 AM 6 comments:

Ta Da!! Proof that I actually did it! Starting college, I never really thought I would actually end up getting a degree. My initial plan was to go to please my parents and (yes, I'll admit it) snag myself a husband. Then I would probably drop out to work to put him through school and make him lots of babies. However, when I met Logan and he told me he wanted to be a dentist, I decided I needed to get my butt in gear because why would a dentist ever want a college drop out? Although my logic throughout the whole process was faulty and immature, I am so glad that I had something to change my mind so I would FINISH. 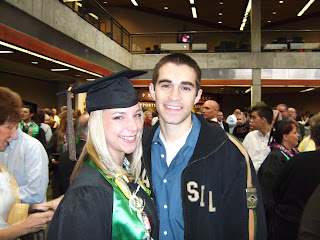 Thanks Logan, for being such a great motivator, inspiration, and providing an endless amount of support to me to finish what I had started. 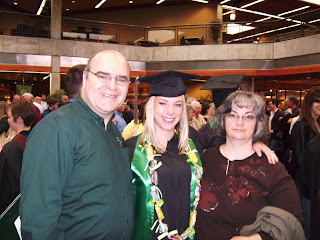 My happy parents
(I swear my mom was happy, she has a hard time smiling at the right time for the camera, hahaha) 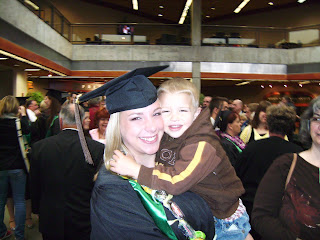 Bill, Deana, Brynn, and her two kids, Gav and Ky came to watch me walk. I just love this picture because my mommy had made me a candy lei necklace to wear, and Gav was definitely eying it when I came out of graduation. He said he didn't want to smile for a picture, but when I told him I would give him a candy if he smiled, this was the sweet result.
(No, I'm not above bribing my nieces and nephews into doing stuff for me, why do you ask?)
(Also, I swear this kid could pass for my son, and really quite like it because he's just so darn tootin cute.)
I have no idea what I'll actually end up doing with my degree, but I am glad that if nothing else, I taught myself I can finish something, even if it is hard, or takes a long time, I know I am capable to complete the goal!
Now, onto getting ready for this sweet little girl to come into our lives, which is quite an adventure, if you ask me!
Posted by Camille Spence at 3:45 PM 3 comments:

For my dance degree, I had to take a class called Senior Capstone. It entails all of the seniors in the dance department to come together and produce a dance concert in one semester. It was a fantastic learning experience, but one heck of a stressor during my last semester.
The other degrees (Ballet, Modern, and Dance Education) had to choreograph an 8-10 minute routine, but that is so unpractical for ballroom, so for my degree we are required to do two opposing styles, any length, any thing you really want to do, just as long as they are not the same type of dance. I started my degree with several other dancers, but by the time graduation rolled around for me, most of the dancers had gotten behind, dropped out, or changed their degree, so I was the lone ballroom graduate this year. It definitely had its pros and cons--I could do basically whatever I wanted style wise because I was the only one, but at the same time I felt an ENORMOUS amount of pressure to do a very high quality job to set a good example for my department.
Rehearsals went great all semester, with very few MAJOR stumbling blocks, but SEVEN DAYS before the concert was to open, I got a nightmare of a phone call. I had one girl in both of my pieces, and she was doing so awesome, and I was feeling great about how things were going to be at the concert the next week. That girl had a freak accident dropping her husband's laptop, and tore all the ligaments through her middle and ring fingers to past her wrist in her right hand. Her doctor told her if she was to dance, she would probably further damage her hand, and need major, major surgery and therapy to repair the damage.
I had seven days to find and teach a replacement for two completely separate pieces!!
I made some quick decisions, and found one angel girl who was available for all of the remaining rehearsals and all of the performances, but I felt very shaky about trying to teach two different people numbers in such a short amount of time...when I realized, "Hey, I choreographed it, I could fit into the other costume, I'll just dance it!"
Mind you, I was 19 weeks (About 4 1/2 months) pregnant at that point. 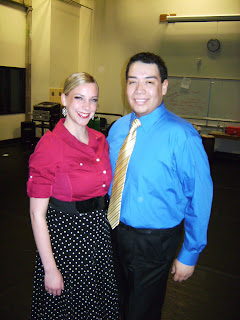 This is me and Abe, my partner for the foxtrot "H.R. Would Have a Fit" which was a story of a secret romance in an office setting. We had to really work hard to hide my baby bump so as to not give off an even MORE scandalous vibe...office romance with a baby on the way? Haha, no. 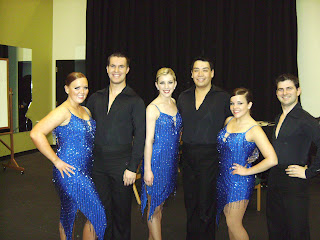 These are my wonderful cha-cha dancers, Caitlin, Joe, Anna, Abe, Brooke (the replacement girl, she was awesome!), and Cory. This was to "Mad World" by the 80's band Tears for Fears. I love the band, but I do NOT want to hear any of their stuff for at least 6 months, haha. The dance was titled "Trapped" and was about abusive relationships and the abusee not being able to get away from the abuser. It was a pretty intense dance, and was very challenging to do something NOT light and bubbly, which comes so much easier to me after all my years of choreographing for younger kids.
It turned out great, and I felt really awesome about how the concert went after it was all done. I had been dreading that incredibly intimidating class for basically my whole college career, and I was so relieved to have it over, and that it turned out so well!!
Posted by Camille Spence at 3:19 PM 1 comment: