After our trip to London, we got on the Chunnel, a train that goes under the water and takes you from the UK to France. The train in front of us broke down so we were stuck under water for a long time before we made it to Paris. Not a huge deal, just a slight annoyance. Especially when that was the specific day our bodies decided to have food poisoning from sandwiches we ate the day before. Train+5 Hours+Food Poisoning=Not a Barrel of Fun.
However, by June 12, our one year anniversary, we were feeling back to normal and were able to hit the town hard. We spent the day wandering the streets, going into little shops here and there, and trying on clothes that were WAY to expensive for us. We then met up with a group later that night and went on a river cruise on The River Sienne, which took us all around and showed us a lot of the famous monuments. We also got to see the Eiffel Tower for the first time, and from that night on, we went every night, got crepes, and watched the tower sparkle. At 10, 11, and 12 midnight, they have all these lights go off for 5 minutes and the Eiffel Tower looks like the most magical thing on earth. More magical than Disneyland...maybe.
We were able to go to The Louvre and Musee d' Orsay, which are two ginormous famous art museums. We went with our friend Dane, who is an art major, and he gave us a lot of background history about what everything meant. It was really cool to see the pyramid at The Louvre because that's been in a lot of movies, including The Da Vinci Code. 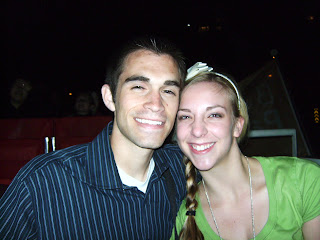 On the River Cruise 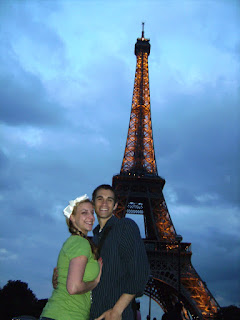 Our first night at the Eiffel Tower, on our one year anniversary 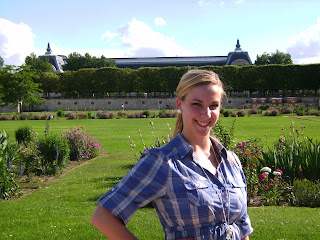 Behind me is the Musee d' Orsay, which used to be a train station before they turned it into the art gallery it is today. 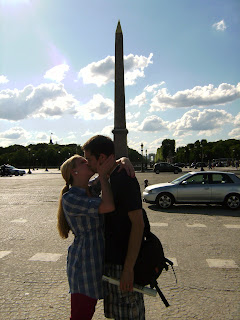 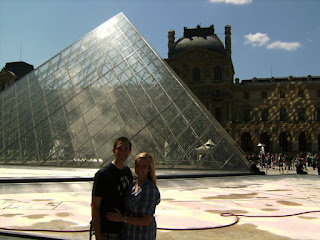 The Pyramid at The Louvre. This is what is in The Da Vinci Code. 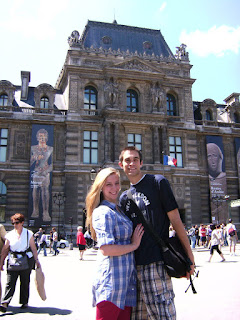 Another part of The Louvre. This thing is like 6 floors and takes up an entire city block. If you stopped to look at every piece in the gallery for 10 seconds it would take you about 2 weeks to see it all. 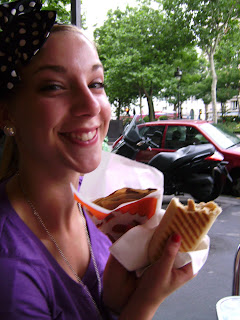 At our favorite Creperie. It was across the street from our hotel and was so delicious and inexpensive. For 5.50 Euro we could get a "formule" which is a combo with 1 panini, 1 crepe, and a "boisson" which is a drink. Our favorite was to get a "Poulet et Fromage" Panini which isChicken and Chesse all melted together on the grilled baguette, and a Banana et Nutella et Coco Crepe , which is a Banana, Nutella, and Coconut Crepe--Kind of like a melted mounds bar with bananas on a delicious crepe. And to drink we'd usually get a tropical fruit juice, or Orangina which is kind of like a carbonated orange juice.
The crepes there are HUGE!! We got crepes every day we were there and I never got sick of them. Some days we would get a savory crepe, my favorite was the Chicken and Cheese with Pepper, but ham and cheese, or tuna and cheese were also delicious. We also ate at the bakeries almost every day, Doug told us to get Pan Chocolate, which is a croissant with really really yummy european chocolate chips through it. So yummy!! We also tried a variety of tarts, breads, and anything else we thought might be tasty. We figured we were on vacation, and we didn't know when we'd be back and Paris, so we basically pigged out. And loved it. France has scrumptious food. I miss it. We were also nervous that the people would be really snobbish since we didn't speak French and couldn't communicate with them. We were surprised to find out that (yes there were some that were rude) most of the locals were very helpful. We tried to be as polite as possible and asked "Par le vous Anglais?" (Do you speak English), before trying to communicate with them. Usually they spoke enough English, and Logan spoke enough French that we got along just fine.
One of Logan's favorite memories about our language barrier was when some dude in a park started shouting over to us in French. We were confused and had no idea what he was saying so we asked if he spoke English so he know we didn't understand him. He came over to us and nudges Logan and asks (in English) "Uh, do you have a paper to roll a, uh, joint?" It took all Logan had in him to tell him no without bursting into hysterical laughter. Of all people to ask, he asks little innocent Logan to help him roll a doobie. Classic.
Posted by Camille Spence at 2:16 PM